O God, I thank you that I am not like the rest of humanity —
greedy, dishonest, adulterous…
I fast twice a week, and I pay tithes on my whole income.’

(This passage is from the Gospel for yesterday. It is from the Book of Luke, Chapter 18.)

My friend Matthew took the above photo, Garbage Flowers,  on his way to his bus stop for work last week. When I look at it, it makes me think about the beautiful things we create and our attempts to share them with others. This image lingered in my mind yesterday when I went to an early service at a Methodist Church to hear my friend preach. Afterwards, my husband and I went to Mass at our parish. Because both followed the lectionary readings of the day, I got to hear the same Gospel reading twice. Above is an excerpt from the Gospel. It goes on to say that we’re not supposed to spend our time thinking of all the ways we’re more awesome than the next person and envying them for their success.  Garbage Flowers and this admonition to not be a “playah hater” merge in this blogpost.

I’ve made a couple of short documentaries in the past year. They are not perfect. I know that.  I am not a perfectionist. The worst part of perfectionism is that people allow themselves to be intimidated and afraid to the point that they will not let their work be seen by others. I have a relative who is a talented artist but doesn’t want others to see what she’s drawn. I have another relative is plain and simple, really good at what he does so he writes many plays each year, all of which are performed publically. I’m not as good at my art as he is, but I’m also not afraid to put it out there, like she is.  I created these films and decided to take the next, bold step of submitting them to film festivals. Each film has been accepted to one festival apiece so far. Each has been rejected from a handful of festivals as well. I’m waiting to hear back from a few others and of course, I hope they are selected.

In the meantime, another film has come to my attention. I’m in search of benchmarks as I wonder how I’m doing in this new-to-me endeavor, so I’ve been checking out the stats on this other film. I realize it is not a good practice and I need to stop doing it. It is like comparing apples and oranges. Our films are not in competition and they are two different things. However, Mamma Mia! It has the support of hundreds of people, almost two dozen organizations and a well-known Hollywood personality. When I learned all of that, I let it bother me because it got a lot more financial support than what I gathered for my films before jumping in.

When I try to temper that comparison and focus on my gratitude instead, I think about this:

I spent about $2000 (including $1000 given generously from National Catholic Sisters’ Week) and yes, had lots and lots of awesome people come forward to offer me other kinds of (non-financial) help along the way. People offered me places to sleep, generously took me out to lunch and kindly introduced me to the women who were featured in my films. Not only that, but many of the women featured in my films were recruited at the last minute. For example, I stayed with a friend in Philadelphia who discerned that it was not her time to be interviewed, but she told the women she lived with and as a result, I got to interview them and they are in it. This happened again and again along the way. I have so much more to be grateful for than to be envious of. About 10 people took a look at it before I released it, giving me much-needed pointers and tips. A musician from Scotland composed the music for one of the films, scoring it from beginning to end. He did this for the love of doing it and did not ask for any money. People came from all directions to help bring these films to life.

I get worked up when I think about this other film (just as the Gospel reading depicts someone getting worked up over other people) because the film uses the personal stories of several people to thrust forth its own agenda.

This is where the Gospel reading really hit a chord with me. As I compare my project with theirs, I get annoyed and angry and, yes, even envious. But, this Gospel reading tells me to get over that and to focus on my own stuff.

When I shift my focus away from this other film to my own work, I can reaffirm my commitment to work ethically.

My agenda for these films is to tell the stories of women who serve the poor. When you make a documentary, you realize there is a great moral task at time. There is a great ethical factor in every decision you make. Imagine you have 1 hour of footage from an interview you did with someone. The person is comfortable with you and likes you, so they speak freely after a while, as though they are speaking right to you. The camera is situated so that it is off your shoulder a bit. That way, they can talk directly to you, which allows them to relax and be open an honest, while the camera is right there, recording it all in an unobtrusive way. When you sit down to take a look at the footage, you realize the power you have in your hands. You can snip together pieces of an interview to fit any agenda you have in mind. In one interview I did, the person, as part of our friendly banter at the beginning, told me about some of the foods she did not like in a particular place where she once lived. This is a simple example but it illustrates the decision that must be made. Do I want the 3-4 minutes of this woman to be marked by this comment? It was made in an innocuous way as we were making conversation. However, it can be used to such an effect that it makes the speaker look like a jerk who complains. Of course, I did not use that footage, but you see my point about how easy it is to be the puppeteer. Anyhow, these kind of ethical decisions are made every time you piece together an interview.

When I shift my focus from seeking accolades…

The last thing I want to talk about is recognition, accolades and awards. I was fortunate enough to attend the two film festivals my two films have been accepted to so far. It was so awesome to sit in the audience and hear peoples’ reactions. I enjoyed answering their questions afterwards and yes, accepting their compliments. I hope to do this a few more times with each of these films. I also know that accolades cannot be my main goal. I guess the main goal is to create something beautiful and to release it into the world. I guess we don’t really have control over how many people see something or how they react to it, including the people who review films and make selections for festivals. I wanted to make a film which documents the stories of religious women (aka nuns) who serve the poor. I wanted them to tell their own stories, in their own ways. Out of the 1 or 1.5 hours of footage I gathered from each woman, I selected the story each one told which brought out the most emotion in her. I even have a hunch that this is something I’m supposed to be doing for the next few years, collecting their stories and packaging them in such a way that the rest of us can hear them and be motivated to serve the poor as they have.

What does this have to do with St. Francis of Assisi? 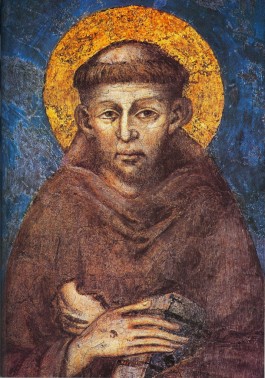 Well, every post, movie, book, meme and video I make has something to do with St. Francis of Assisi, sometimes overtly. In this blog post, I think that there is a place for Francis’ admonitions to not be too hung up on our things. That even means the things we create-one’s “brainchild” for example. I think we can be excited about the stuff we create and put a lot of work into but that ultimately we have to let it go and let others do with it what they will.

I don’t know if this blogpost makes sense to anybody else out there. If it does, I’d love to hear about your own experience with this stuff (being envious, getting over yourself, filmmaking). Thanks for taking the time to read it, in all its glorious imperfections, and yes, you can make the Garbage Flowers your screensaver if you’d like.